The last few weeks while I’ve been buried in writing places other than here, I’ve been mentally teasing out the difference between collecting and hoarding. At the root of it, collecting seems to be a social activity – one that both takes the collector out into the world and one that brings others in to appreciate the collection. But what of hoarding?

Hoarders are known for the isolation that accompanies their stuff. They cannot bring people into their homes and their own family members are generally pushed out. Home becomes inhabitable. Stuff rules. But many of these people also lead active social lives outside of their homes, and they often seem outwardly gregarious. Is it just the home-space that is overrun with things? And then, in some ways, both the crazy couponing people and the collectors are making their homes unhomely by allowing their collections to take over, as organized and catalogued as they may be. The gathering/gleaning aspect of hoarding forces the hoarder into the world and in some instances does create social connections. 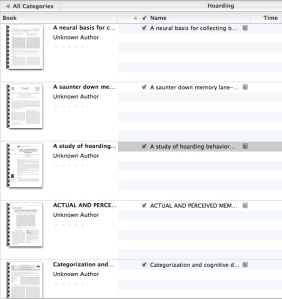 Of course, I could read one of the twenty research articles I’ve downloaded on this very topic rather than letting the digital files gather dust as I write into the vacant blogosphere from which answers rarely come.

I finally had the occasion to watch Les Glaneurs et la glaneuse (The Gleaners and I) by Agnès Varda (2000) over the last few days. Although Varda is more interested in gleaning as a cultural activity from its artistic depiction and production to its life-sustaining ability (not for the pure sake of accumulating), her film got at some root questions about the activities of gleaning, picking, and recuperating. One of Varda’s interviewees, a judge, explains that the edict authorizing gleaning in 1554 is the same in today’s penal code: after the harvest, those who are in need (les pauvres, les malheureux, les gens défavorisés, etc.) can glean from sun up to sun down. Varda asks, how can we explain gleaning, though, for those who are not needy but simply enjoy it? “C’est comme s’ils avaient besoin de quelque chose pour manger. S’ils glanent par plaisir, c’est qu’ils ont besoin de quelque chose pour leur plaisir.” The Maître explains that the law still applies if they respect the conditions of gleaning. These people still have a need, a need for pleasure, that they are trying to fulfill.

At the root of gleaning lies need. The force (la pulsion) that compels is what interests me now as much as what is gleaned (l’objet).

Varda, herself a gleaner of sorts, collects images with her camera and is especially interested in the image of her own aging and foreign hand being filmed by the camera held in her other hand. She says she has little memory and that gleaning functions, for her, to summarize the journeys she has taken – c’est les objets qui racontent le voyage.

In some sense what we collect will always tell the story of where we’ve been and who we are because something within us, specifically related to our inner needs, dictates what objects we will pick up – especially if we must stoop over and humble ourselves to pick up someone else’s castoffs. What does it say about me if I’m willing (or what would it say about me that I would be willing, what is it in me that makes it worthwhile for me) to sift through someone’s trash to find … a fountain pen, a worn-out French text, a fragment or relic of beauty that would only be beautiful to me?

This isn’t really about me and, yet, it is only about me. What do my collections reveal about my own connection to my memory and the vacant spaces in me they are attempting to fill, whether they be theoretical or physical?