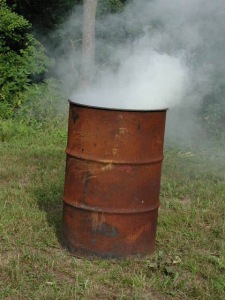 The place where my HP father lives is about four miles outside of a smallish town, and although they have neighbors around them, it can be classified as in the country. In the backyard near the deer pen there is a burn barrel, which is basically an old rusted oil barrel – the kind you see hobos warming their hands over in grimy movies about New York. (Gawd, I hope that wasn’t an offensive image – at least not any more offensive than the image I’m painting of my parents. A nicer image might be of a steel drum?)

My parents keep their compost, basically feeding vegetable scraps to the deer. They recycle plastic and aluminium, which means hoarding cool whip containers and cans in the garage. They burn, however, the majority of their trash.

One day during university I was visiting my family and sorting through things I had left at their house. I made a pile that I decided to burn. I no longer remember what I burned exactly, since I know I still have boxes of notes and even printed emails that have been condensed but stored over the years. I do remember that I took the opportunity to burn some of my father’s things.

Each time I visited, my step-mother would lament how much these collected things weighed on her. She sometimes joked about getting her own place to live just to have space; but now I know that she, too, contributes to the piles.

If you ask my father politely if you can dispose of his 1980 phonebook from a town in another state, he will shriek, “No. I need that. There are numbers in there that are now unlisted. I use it still.” Instead, I took the stealthy strategy of quickly grabbing a couple of phonebooks from his stack. Not too many that he would notice, and not the oldest one. And oops, out they went into the burn barrel along with my things. I couldn’t pray for the flame to burn any faster and kept looking over my shoulder in case he noticed the pages of his beloved phonebook flying up in the air with the smoke. I don’t think he ever found out. At least no one ever mentioned it to me.

I read so many messages from other COHs about the valuable things that are lost in the hoard. Recently there was a story about a purple heart that had gone missing in the mess. I can’t even afford to think about what’s worth keeping in my parents’ house at this point. There probably are some wonderful treasures, valuable ones, in the stacks. Mostly I think there would be nothing more redeeming than watching it all go up in smoke once my parents are gone.